After years of searching the Athentic Brewing Company Finally has a Home for the Brewery!

The first place we ever considered for our brewery location was a 4000 square foot warehouse on Paradise Blvd. It was literally in the shadow of the Terrapin Brewing Company. Since then, we have probably poked around 20-30 industrial/ commercial properties in or about Athens Georgia with one excursion that lead us over to Monroe GA. Every property had potential in some form or another to become our brewery, but various circumstances always prevented us from closing the deal; too far away from Athens, too small, too costly, not enough parking, owner did like the idea of a brewery but mostly because we were simply not fully prepared to pull the trigger.

My wife said, “The right property will find you when you are truly ready”.

As we continued to explore properties, the one factor that stood out was that for a smaller sized community brewery, the location would be the most important factor. The brewery needed to be part of a destination and in the heart of Athens. This realization gave us new focus and lead us to preparing letters of intent on four properties located in downtown Athens, at the Beachwood Mall, on Pulaski St. and in the Normaltown area.

As we proceeded with negotiations on these four properties, some dropped away, and others rose to the surface. The final push lead us to securing a lease at 108 Park Ave. We feel that this location is absolutely perfect for a local brewery; next to Normaltown, close to a variety of neighborhoods, directly across from the Piedmont Athens Regional Hospital and within close proximity to Bottleworks and downtown Athens. 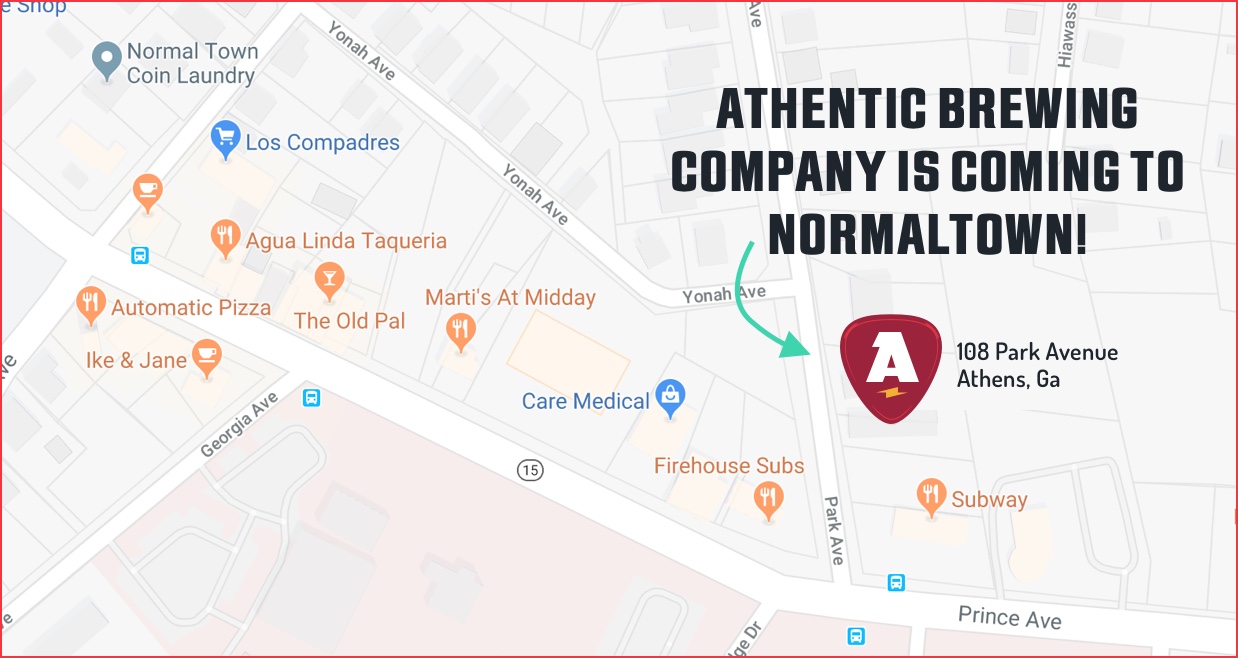 When Will we be Open?

We have already started cleaning and sprucing up the exterior and will begin interior renovations once we have the proper permitting from the City of Athens/ Clarke County.  We are anticipating an opening in mid-2019. Stay tuned for more details.

Back in 2014, Mark Johnson, Rob Flakus and I were sitting around the brew kettle waiting for the boil to finish and we got to pondering what to call ourselves as homebrewers. Someone said “How bout Kudzu Brewing Company” and we all stopped and said, “Hey, that sounds pretty good”.  The more we said it the more we liked it and it just sorta took and before we knew it, that became our name. In fact, we actually brewed a Blonde Ale with Kudzu Flower that turned out pretty fantastic so it would appear that Kudzu was really growing on us (get the pun?). 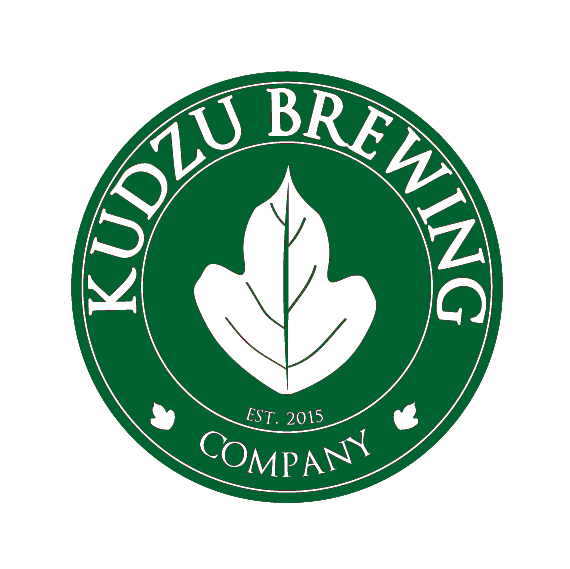 As we started aspiring to open an actual brewery we just assumed the name would stay the same.  We did some google searches and found a few references to a Kudzu Porter by the Back Forty Beer Company (remember this for later) and a reference to another homebrewer in North Carolina that was going by the same name. Assuming that neither of these was going to be a conflict, we established our legal business entity as Kudzu Brewing Company. Deylah McCarty developed a very cool logo with the Kudzu leaf as the center piece and we even went as far as to have pint glasses made with this logo. 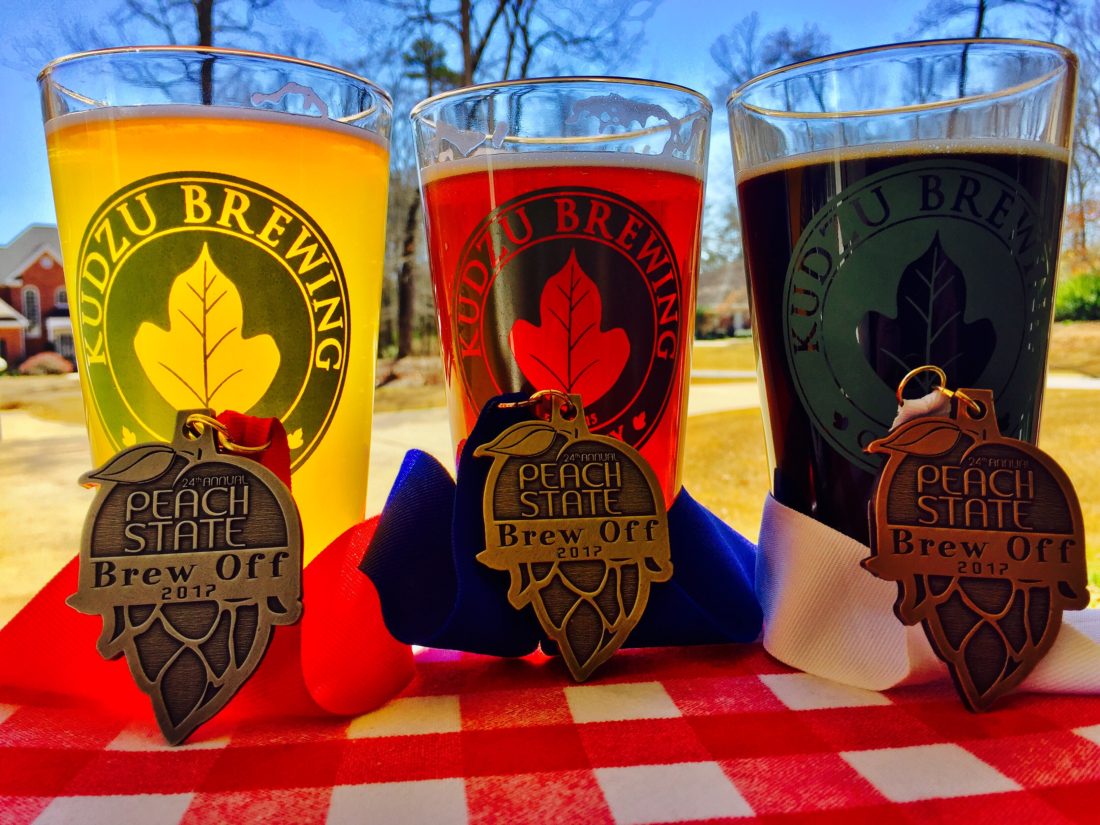 At roughly the same time, we engaged an attorney to help us get the name ‘Kudzu Brewing Company’ officially trademarked. Now, remember when I said earlier that the Back Forty Beer Company had a Kudzu Porter. Well, as it turns out they also had a trademark on the name ‘Kudzu’ in the category of beer. So what we were just now realizing is that proceeding with the name Kudzu Brewing Company would be risky. We decided to reach out the folks at the Back Forty Brewing Company to see if we could share the name ‘Kudzu’.  The answer was a quick “No”. We then proposed buying the name, but what they wanted, we simply could not afford.

OK – so now what do we do? We needed a new name and fast. We brainstormed no less than 300 names and honestly, I think the list was closer to 500 names by the time we were finished, most of which were already in use, and for the others we simply could not reach a consensus. As an act of desperation, we were going to use the name Konka Donk Brewing Company. The name ‘Konka Donk’ was derived from a trip to the Charleston Beaches where my wife and I were hunting for Conch shells and I initially was using the name for our porter beer. After being tired of people asking what the heck is ‘Konka Donk’ or people thinking it had something to do with ‘Badonkkadonk’ after which I found out the meaning, I was like, “Why is this happening to me?”

So we were back to the drawing board once again and this time we happened to revisit a name that was previously on the list but had not made much of an initial impression. The name was ‘Athentic’.  It was a made-up word that playfully combined two words; Authentic and Athens. The name ‘Athentic’ is our way of describing in a single word both our love and dedication to the Athens area and our desire to remain true and genuine in the way that we brew beer and in the way that we create great experiences for our friends and future customers.

And that is how we became the Athentic Brewing Company. Cheers! 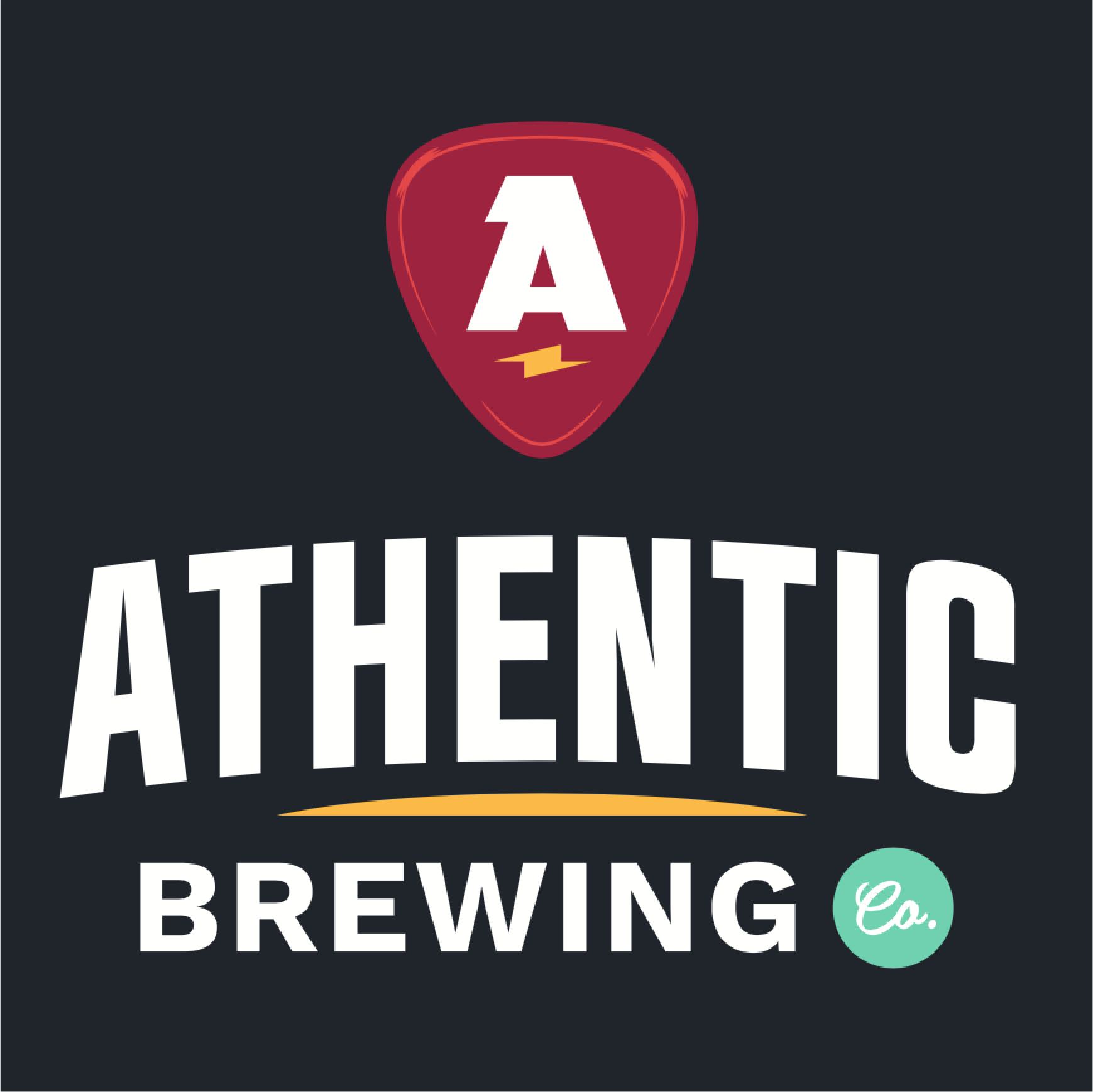 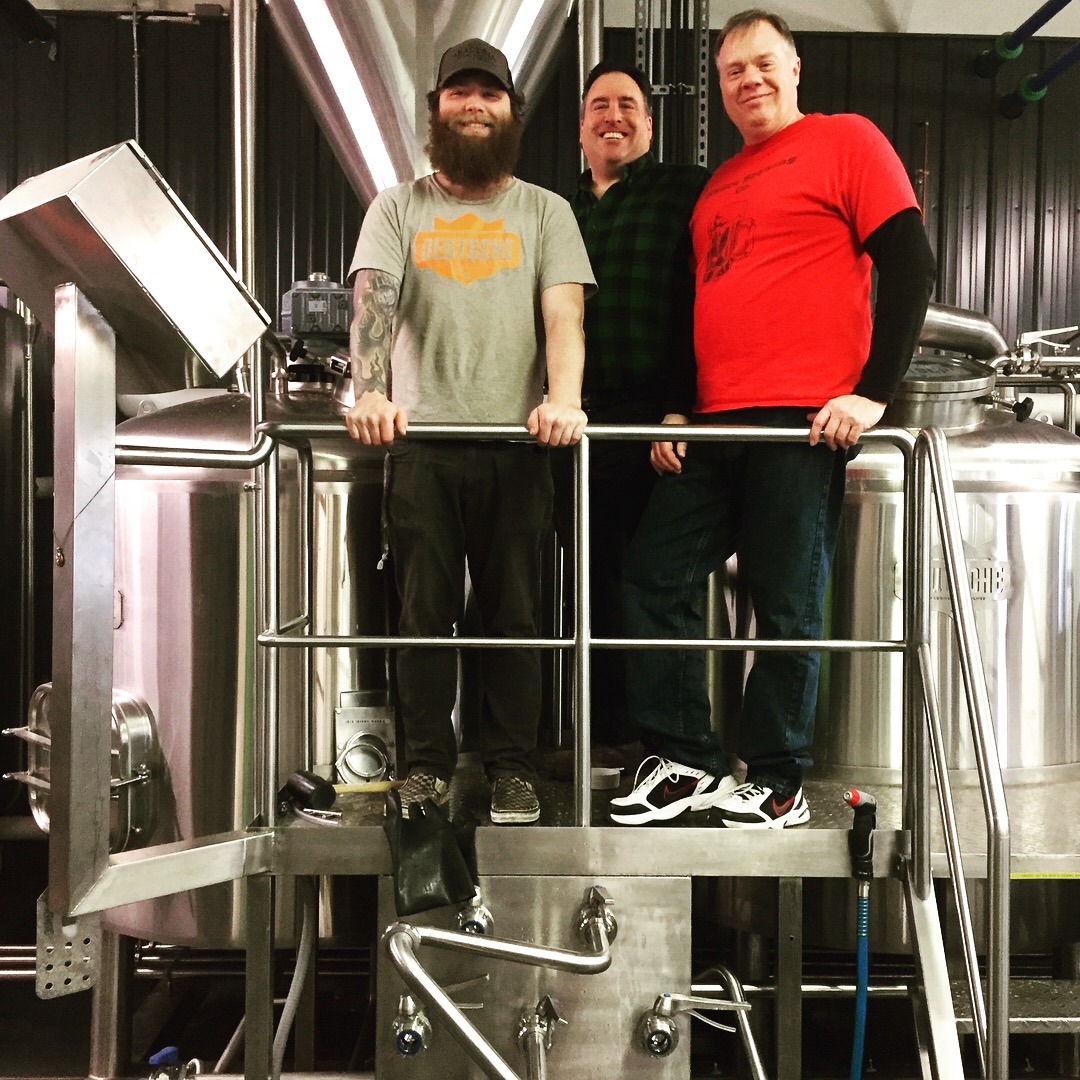 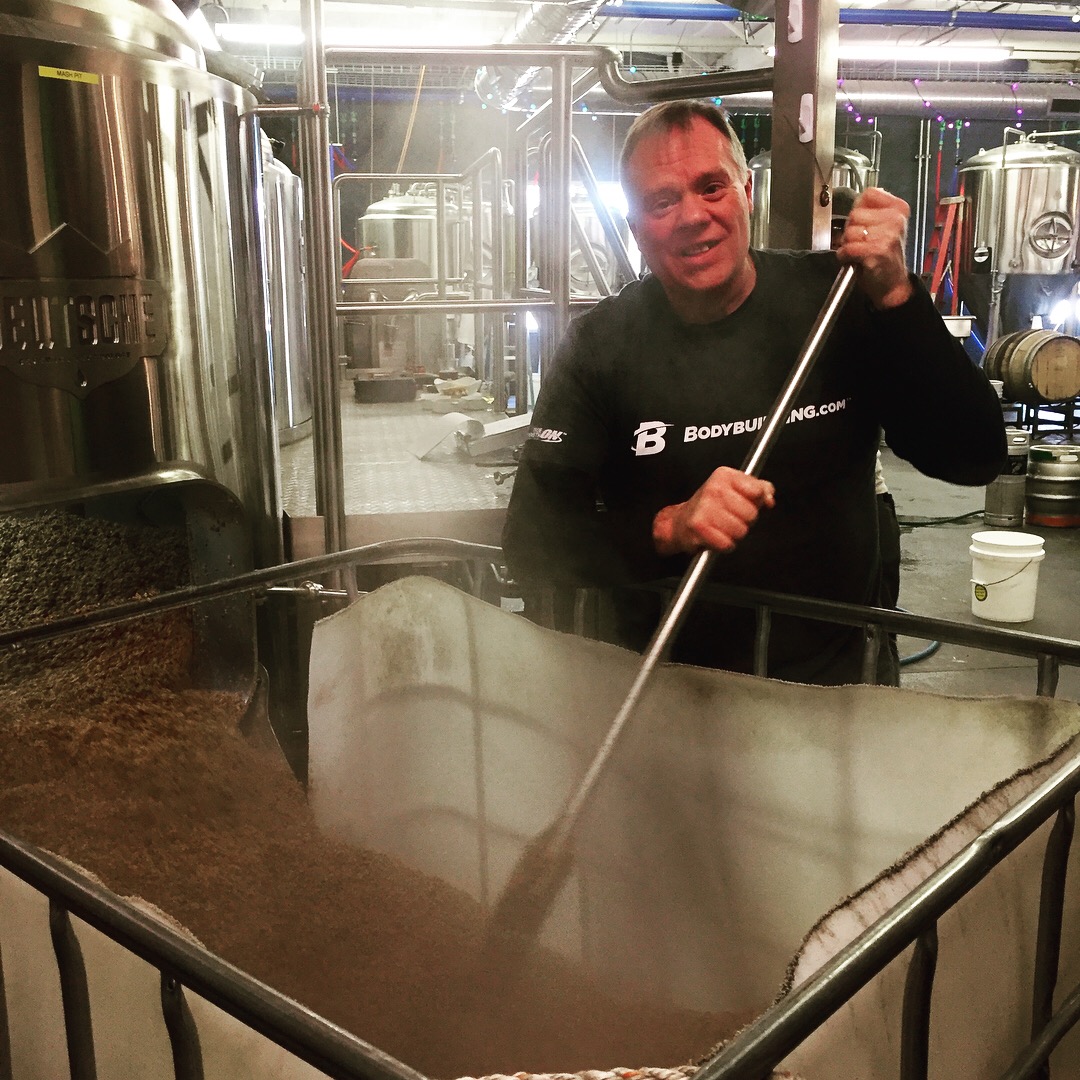 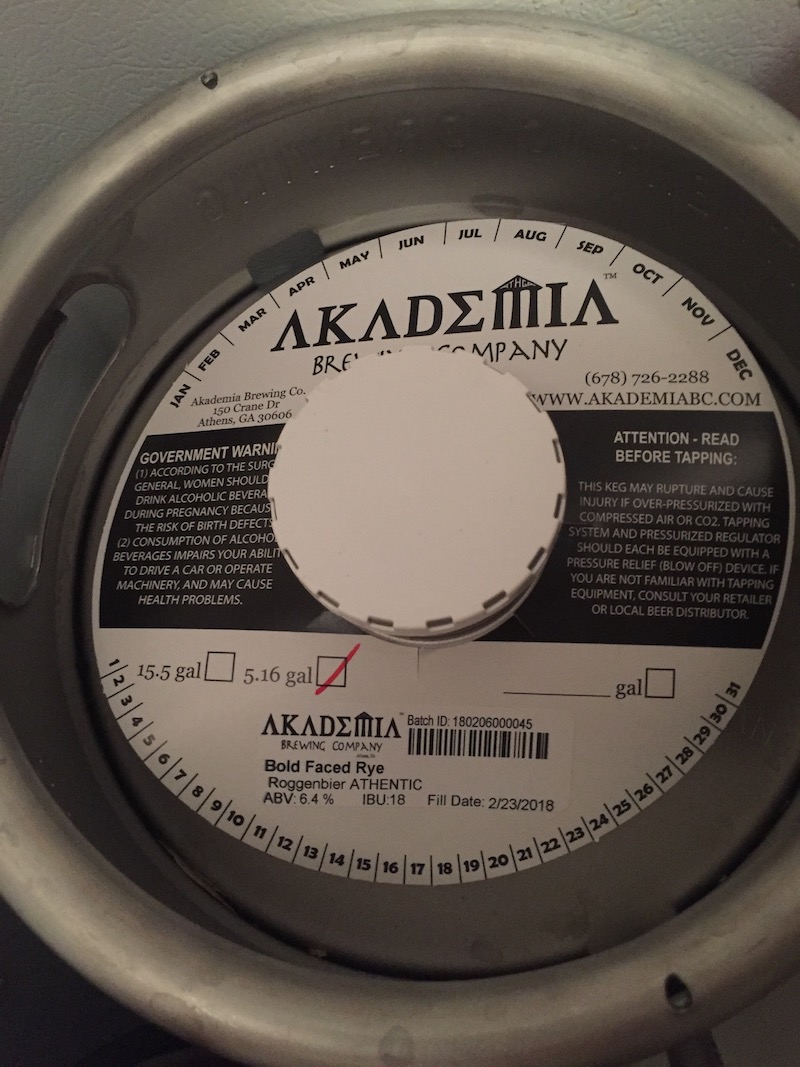