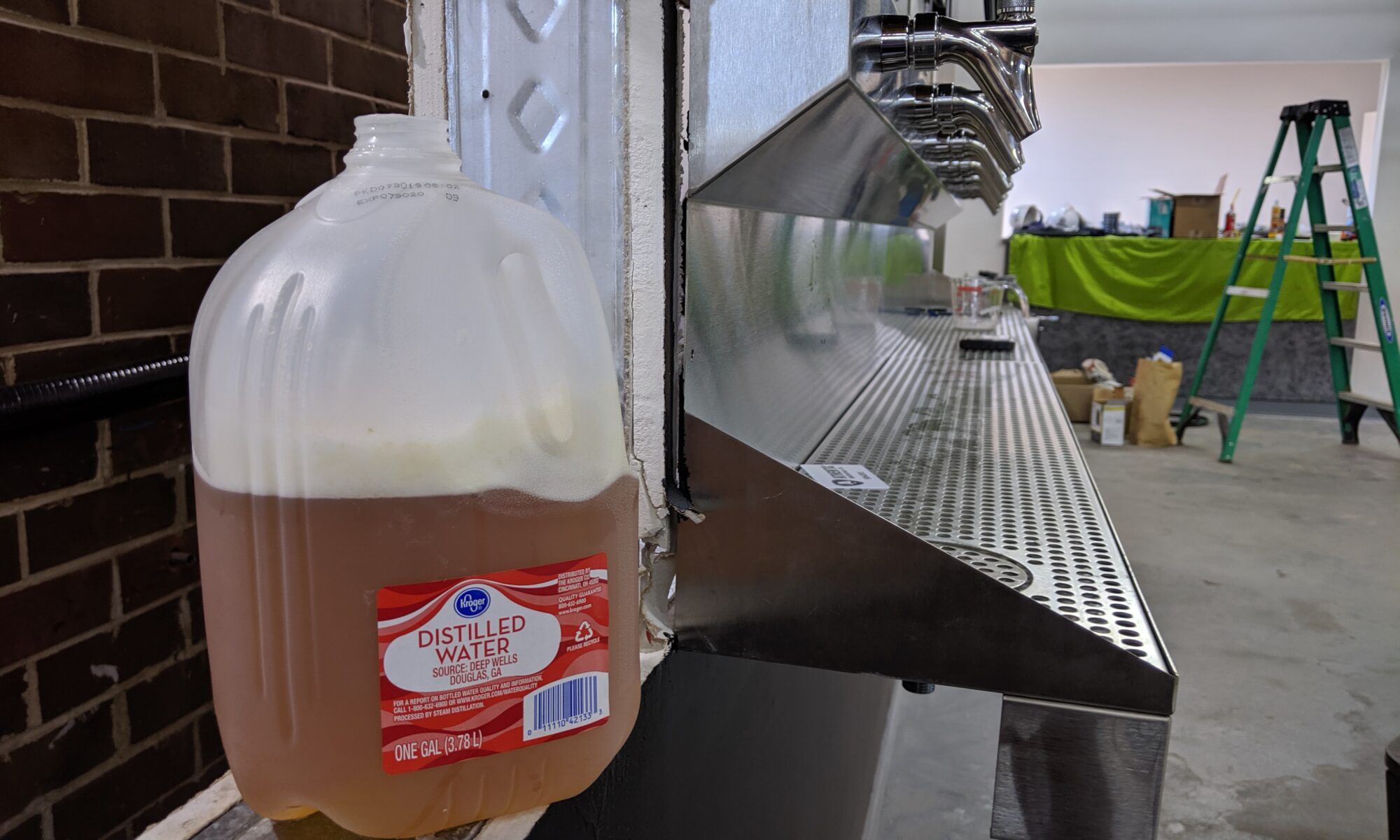 We have six serving tanks and six keg lines, each with its own beer line. Each beer line requires calibration to ensure that each ounce of beer registered by the system is precisely one ounce of beer poured. To calibrate the self-serve beer wall, you need beer. Well, obviously you need beer – right?

Rick Weber of Table Tap, said, “We will be ready to calibrate the beer wall tomorrow and we will need cold beer”. The question on our minds was- what happens to uncalibrated beer?

The answer: it goes through the system and then drains into a bucket, milk jug, or other receptacle. It was then further clarified that we needed a half barrel keg full of beer that we were, more than likely, never going to drink.

16 gallons is a lot of beer to sacrifice for calibration. After all, we currently have so few kegs of Athentic Beer*, and it was a struggle to think of “my precious” going into a bucket and then down a drain.

Weber must have seen the anguish in the situation and quickly stated, “any beer will do. Go get a half barrel keg of the cheapest beer you can find and bring ice. It will need to be chilled.”

Two discount kegs caught my eye; one for $39 and another for $45. Wow – now that is some cheap beer. Considering that the keg deposit by itself was $75. You can only find gems like this in a college town. The $39 keg was nowhere to be found (bummer- someone else must be either calibrating a system or there might have just been a huge football game in town), so we ended up with the slightly more expensive one.

The lady that was helping Skinner to fill out the required paperwork for the keg deposit asked if he would be drinking the beer at the same address as listed on the driver’s license. Skinner gave her a perplexed look and said, “Drinking the beer? No, I am actually going to pour it down the drain.” Well – that statement caught the attention of everyone standing within earshot at Five Points. Apparently, this is not something that you hear every day in a package store.

He went on to explain how we needed to the beer for calibration of our self-serve beer wall at the Athentic Brewing Company and she seemed much happier, knowing that he was not some kind of crazy prohibitionist.

As he was transporting the keg of beer back across town to the Athentic brewery, he got to thinking that the first beer to be poured in our new craft brewery was going to be a cheap macro beer and started chuckling.

2 Replies to “Calibrating the Beer Wall”

Website visitors have to be 21 years or older to visit the site.